Cinchin' It Up in the Victorian Era

Cinching Up in the Victorian Era – Corsets! 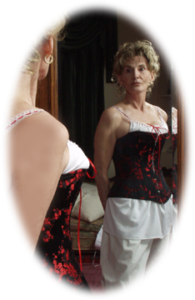 The topic of corsetry has many dimensions and can invoke the imagination in many ways. It might prompt you to contemplate saloon girls, female sexuality, appalling discomfort due to cinching, seduction, or scenes from a movie when the leading lady faints due to tight lacing. After thinking about it, you might even wonder why women ever wore corsets.

Corsets were a fundamental part of everyday life for women in the Victorian era (1837-1901), whether they lived in the big city or way out west. This binding piece of underclothing was instrumental in shaping not just their bodies, but their lives as well. In order to understand this concept, it is helpful to appreciate the sociological aspects of being a woman during this period.

Women were expected to become wives and mothers, tend to the household, and raise the children.   Voting or participating in politics was not a consideration. Taking responsibility for their own bodies in ways of birth control or sexuality was forbidden. Arranged marriages were common, especially if the family were wealthy. If the woman married into good fortune, she would have many servants at her disposal and would do little but direct the servants (but still under the rule of the husband). If the family was not well-to-do, she would need to scramble to find a man to take care of her since there was little work available for women other than being a servant of some type.

Status or class within society was everything in the Victorian era. Members of high-society believed that clothing could be read like a book. Women were expected to maintain high societal standards, especially those of the upper classes. They continually fought to maintain their position in society.

Society was driven by strict moral standards and maintaining a moral appearance was expected of women. Ladies who did not conform to the rules of morality were considered of questionable character. Unmentionables were never discussed in mixed company and were certainly not to be seen by men. Although morality dictated the masses, the undercurrent of sexuality remained in tact. If a man were to view a lady’s ankles, it was considered tantalizing. On that scale, consider how the image of a woman in a corset might have appealed to the male imagination.

So how did women distinguish themselves within the upper and lower classes? Tightly laced corsets and close-fitted clothing created the differentiation. This indicated that ladies of this stature did not perform work themselves. Bulges and rolls on the body were considered unacceptable and were associated with the lower classes.   The corset enabled the wearer to produce a form-fitted, moral, and fashionable appearance, indicating good breeding. Maintaining this level of appearance produced the impression of being upper-crust, enabling the wearer to appeal to a better class of husband and fit in with the desired social circle.

During the Victorian era, children were treated, and dressed, as miniature adults. Corsets were donned from early childhood, forming their bodies in preparation for the more restrictive corsets adopted as they matured. This gave the children the same class distinction associated with their parents.

There were as many types of corsets as there are bras today. This created competition between manufacturers seeking corset customers.   Corset advertisements made many claims promising proper shape, comfort, faultless design, self-adjustment and glove-fitting form. As women became more active, corsets were made for every type of sport including swimming, bicycling, tennis and more. There were even corsets called abdominal corsets designed to be worn during pregnancy. The lower part of the corset had side lacing that expanded to support the growing abdomen. Women wore these corsets as long as possible and for the remainder of the pregnancy, they virtually retired from public view. Corsets designed to support the abdomen were available for men as well, although not as prevalent.

Tight lacing became a fad of the time period especially among the younger women. The medical community spoke out against corset wearing and blamed women’s health issues on tight lacing. Often unfounded, the corset was labeled as cause of death without looking further. Many Doctors attempted to reform corset design and came up with their own corset styles, making claims of improved health and protection.

Godey’s, a popular fashion magazine of the time, ran several columns regarding the consequences of corset wearing.

“You are aware young ladies that by means of tight lacing, the waist of the female figure may be made to vie with that of the wasp, and to resemble the form of an hour glass or the letter X, thus very much approving its appearance. The rose however, is never without the thorn; the most agreeable evening party has its drawbacks. And so there are, unhappily, some unpleasant results consequent on compression, at the expense of which a slender waist is purchased.

The circulating fluid, from a disagreeable law of nature, is forced up into the head. The color of the fluid is rosy, as you know. The delicate health attendant on tight lacing forbids it to adorn the cheek, and accordingly it is transferred to the nose, which its tint does not adorn by any means. Within the circle of the waist are comprised certain plaguy vessels, whose freedom from pressure is unfortunately required. When they are subject to obstruction, as they are by close lacing, there is a vexatious tendency in the ankles to swell, and the worst is, that a tight shoe only renders the disfigurement the more conspicuous.

Corsets became even more prevalent with the invention of the sewing machine. Factories began producing them in volume for a variety of activities. This attracted women to the workforce enabling penetration into the male dominated business world, although they primarily held lower-paying jobs.   Later in the century, some women became factory owners, designing and patenting their own ideas.

Everyday corsets were constructed using heavy linen, cotton, or even soft leather and were quite frequently a drab color. However, corsets for weddings and special occasions could be made of colored silk satins. Support was provided by whale bone as the reinforcement which was purchased in large sheets and stripped down to create the rigid yet somewhat flexible boning. Cording, and plants or cane with strong fibers, were also used to create support. By the middle of the 19th century, the steel industry created flexible steel that was used as support. Beginning in the 1860s, manufactured corsets were sprayed with vegetable starch, placed into what were called iron maidens (molded iron devices shaped like a woman’s body or how they anticipated to shape it), and steam-pressed into shape. The front fastened with a straight metal piece on each side called a busk. The busk is similar to heavy duty hooks and eyes and could be straight or spoon shaped to cover the abdomen. The back closed with adjustable laces.

Women complained about the discomfort while wearing corsets – understandably so. The whale bone would sometimes break often penetrating the skin of the wearer. In addition, the body was being pulled into an unnatural shape and often padded to fill out areas of deficit.

It is not an easy task to produce a period corset that fits the modern body. Since women were corseted at an early age, their bodies were trained to the tiny waist. This is one reason why a corset pattern of yesteryear, with a very small waist, would not fit a body of our modern time period without modification.

So you can see that in past times, corsets played a very significant role in women’s lives. They were a means of achieving a fashionable appearance in order to be more upwardly mobile, produced a moral appearance in order to maintain societal standards, formed gender class distinction, and introduced the possibility of work over marriage.

Corsets are very important when recreating fashions of the period. They create smooth body contours necessary for correct fit of the form-fitting bodice. A reproduction corset is essential to achieving the grace and elegance of the period. They can make you feel like a true Victorian lady of distinction.   And, they can be fun, whimsical, and sexy when worn on the outside for all to see!

A well-made reproduction corset can be constructed to achieve the desired look without the uncomfortable side effects.   They can be made to have greater flexibility through the use of bendable spiral metal boning.   Fabrics can be anything from heavy cotton twill to luxurious silks. Busks as front closures, similar to the originals, are available today. And, it is certainly not necessary to lace tightly to get the desired effect!

Back to the Historical Research page