The frock coat is a very distinguished and masculine period coat that brings a gentlemanly appearance to the wearer. Nothing can turn a girl’s head faster than a tip-of-the-hat from a gent dressed up in his period finery, fully decked out in frock coat, waistcoat (vest), neck wear, hat, and of course, let’s not forget the guns.

The frock coat is differentiated from other men’s coats of the period by the seam at the waistline that separates the skirt from the upper part of the suit. Although not the only style of suit or clothing for men of the period, they were the mainstay of men’s wear throughout the mid-19th Century, and were still worn into the early part of the 20th Century. 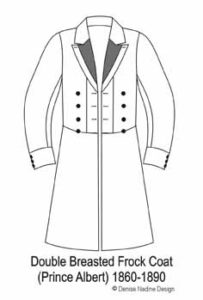 The cut and style of civilian frock coats varied throughout the century. The earlier style of frock coats, 1820 to the 1840’s, were outfitted with fuller skirts and a slightly more gathered sleeve at the top of the shoulder. The collars were much higher in the back, leading into wider and larger lapels. Shoulder seams dipped low on the back. Some lapels had an additional notch added between the collar and lapels forming what looks to be a sideways ‘M’ shape. During this time frame, men wore tailcoats for daywear as well.   This is the type of frock coat that would have accompanied settlers on their journey out west. An excellent reference for this style of clothing can be seen in the recent TNT television series Into the West. Eventually, the frock coat replaced the tailcoat for day wear. 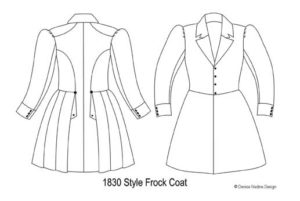 After 1860, coat skirts became straighter and less full and the sleeves became more tailored. The shoulder seam that was previously placed at a low position on the back was now raised to a higher level to coincide with the back seam of the sleeve, and the collar became narrower and more fitted. Hemlines went up and down as fashion dictated as indicated in Harper’s Bazar -October 1891 – Frock coats are made very long, extremists wearing them to reach below the knee.

Other than minor changes, such as sleeves that were wider at the elbow during the 1860’s, the style, cut and construction of the frock coat primarily remained the same up until around 1900. That is good news for gentlemen portraying different periods!   They can wear the same garment and be historically correct for many decades, not having to be concerned with many fashion changes such as those in women’s clothing of the period that included bustles and hoops, etc.

The frock coat was at its most popular in the mid to late century. It became the mainstay of men’s day and business wear for all classes of society. Out west, where activities were less polished, the frock coat would have been worn for evening activities as well. The double-breasted tailcoat (a double-breasted frock coat with the skirt cut away into tails) prevailed for formal activities such as dinners, balls and social events.

As with all other suits of the period, the frock coat was worn with a waistcoat (vest), bosomed shirt, pants held up by braces, and the correct neck wear for the period. Fabrics for waistcoats ranged from a fabric that matched the suit to brightly colored fancy silk brocades.

Frock coats were made from the fabrics available during the period such as wool, silk, cotton, linen, or a blend of these thread types.   Plaid and striped fabrics were very common during the 60’s and 70’s and were worn together as pants and coat.   Inner lapels of double-breasted coats were made from silk bordered by wool fabric. It was common for the lapels, decorative pockets and cuffs to be made out of contrasting fabric, or trimmed in a matching or contrasting color. Covered buttons, often embroidered were available as early as 1826 and frequently adorned the coats. Metal or vegetable dyed ivory would have been used for buttons as well. Other natural materials were used such as horn (mid-century), and pearl (1885).

An excellent movie reference for historically accurate men’s wear for the 1860’s is Gangs of New York. Although this is a particularly violent movie and not for everyone, the clothing is extremely well done and depicts the styles and fabrics available to the different classes.

As mentioned previously, frock coats remained popular until the end of the century until its rival, the morning coat (or cut-away) gained popularity. From Harper’s Bazar – October 1891 – New York Fashions – Men’s Dress – Cut-away coats of fancy striped worsteds or of gray diagonals form part of autumn suits. Young men will continue to wear black Cheviot cut-away coats for day dress, though the preference for the double-breasted frock coat is even greater than it was last Winter. The vest may be of the Cheviot or of a fancy figured vesting. The trousers are fine stripes and checks of grayish blue or brown shades.

Keep in mind, there were many other styles of men’s coats and jackets worn during this time period as well, such as morning coats (cut-away), evening dress coats, tweedsides, lounge jackets, reefers, dinner jackets (1890’s tuxedos), blazers, and more. However, there is too much information for one article!

The cut and construction of all clothing from the 19th Century differs greatly from our contemporary clothing, particularly in the area of men’s jackets and coats. Many reproduction frock coats are designed to give the appearance of being historically accurate but are actually constructed using contemporary cuts and techniques. These differences can be aspects to watch for, depending upon the level of historical accuracy you are seeking to achieve in reenacting.

A reference guideline and corresponding diagram have been included in order to provide a better understanding of the anatomy, and cut and construction, of a frock coat from the 19th Century and how these methods contrast with modern construction techniques used for men’s clothing. 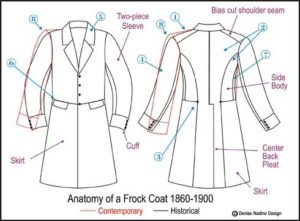 A period coat is an investment no matter what your budget and should fit you well. Getting a frock coat to fit is like getting any other men’s suit to fit properly.   If you are buying off-the-rack, you may have to compromise fit in some areas but this option may be less expensive.   The other option is to have one made for you that is custom-tailored to your physical and material specifications.   This method offers a greater selection of materials and enables you get the fit you need. Remember, it is an investment! Some aspects to look for are: good shoulder room, correct arm length, good fit in both chest and waist, the waist seam should be at the waist of the wearer (this may be difficult for tall men buying off-the-rack). Additionally, make sure that the coat fits over the top of all the other layers of clothing you will be wearing.

One of the special things about reenacting characters from the Victorian or old west era is the distinction between ladies and gentlemen in contrast to today’s gender neutrality. The frock coat greatly contributes to that differentiation.   Men look so good in frock coats that I am surprised that they haven’t come back in style for modern wear. Whether you wear your frock coat with a derby, cowboy hat, straw hat, or top hat, gentlemen, please keep wearing those frock coats! 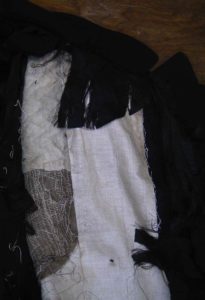 Photo: Extant Frock Coat Caption: Photo shows the exposed inner lapel of an extant double-breasted frock where the silk has rotted away. Note the layer of light wool

(upper left) and canvas that reinforce the lapel and extends to the shoulder. From the author’s collection.

Back to Historical Research