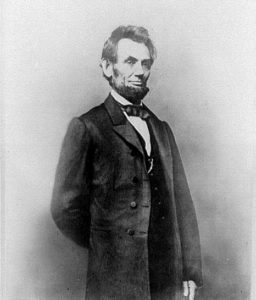 Researching extant clothing from the past can be a very rewarding experience as it can tell such a story. As a historical clothier and researcher, I have a great interest in men’s tailoring and tend to view history in general through the filter of clothing, its construction, and fabrication.

Abraham Lincoln has been in front of me my entire life with that famous face on currency and in history books. Until recently, I had never had any desire to venture into his world other than that. Then last year, I had an opportunity to delve further into Lincoln’s world through his wardrobe when Lincoln enactor John Voehl, of Abe Lincoln Alive, was in need of historically accurate clothing for his portrayal of Lincoln. We both thought this was going to be a straight-forward effort – standard wear for an 1860’s gent.

I began to wonder if there was something special about Lincoln’s clothing, the way he wore it, or the construction of it. Initial searches on the internet led me to a clue that something was embroidered on the inside of his coat – One Country, One Destiny. The continued research unveiled the story of a president, his clothing, an assassination, and one of the oldest clothing manufacturers in the United States. Intrigued, the next step was to contact the Ford’s Theater National Historic Site to see if any of Lincoln’s clothing actually existed. I was able to contact the curator there and found to my astonishment, his clothing did exist. After signing a few releases, I was able to obtain photos of the clothing in which he was fatally shot on the night of April 14, 1865. 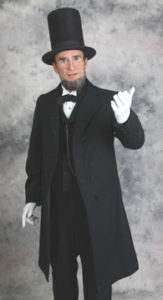 The moment I saw the images, the project struck a personal chord and Lincoln became human to me. I could just imagine a husband and wife out for an evening of theater never knowing that it would be their last together. On that fateful night, his life was taken from him and those who loved him. And the clothes are left to tell the story.

Even though I was not able to get up close and personal with the clothing, it was an honor to view them and recreate the reproductions as closely as possible to the originals. As you will see by the photos of his vest, frock coat and trousers, it would be very difficult to reproduce the items just from these images alone. It required some educated guesses on my behalf based upon prior research, study, tailoring experience, and customer budget.

To reach John Voehl as Mr. Lincoln visit http://abelincolnalive.com/
Back to the Historical Research page